This article is the first in a series called "Science for Everyone". The academic literature does not always reach wider audiences. The format and language can be inadequate, and the paywalls can significantly limit access. For this reason, we aim to publish more accessible summaries of degrowth-related academic papers, which will hopefully extend the discussion on these topics in society at large. We believe that the general public and academics will both benefit from a more open sharing of ideas.

Capitalism typically goes through cycles of expansion to contraction. We commonly refer to these as ‘business cycles’ or ‘economic cycles’. Every now and then, however, these cycles go off the hinges. They become unstable and can lead to recessions, crises and depressions. This inherent instability of the capitalist system cannot be explained by standard economic models. Instead, those models blame instability on excessive regulation, government interventions or other factors outside the market-economic system. Some unorthodox economists see it differently. Steve Keen, for example, developed an alternative kind of economic model—one that can mimic instability. The model provides compelling and urgent insights into how economic crises arise from within the structures of capitalism. Another crisis seems inevitable as long as the causes are misdiagnosed.

During a briefing on the 2007/2008 global financial crisis, Queen Elizabeth II asked academics at the London School of Economics why nobody saw it coming. The response was:

“Your Majesty, the failure to foresee the timing, extent and severity of the crisis and to head it off, while it had many causes, was principally a failure of the collective imagination of many bright people, both in this country and internationally, to understand the risks to the system as a whole”.

But in reality, many did see it coming (Bezemer 2009). They were simply looking at it from a different angle.

Neoliberal economists typically look for explanations that have little to do with the economic system itself, such as a political event, a bad policy or some other so-called ‘exogenous’ factor—something that originates from outside the economic system as such. In the words of a neoliberal think-tank:

“[I]t’s not capitalism that falls over, it’s those attempts to constrain it too rigidly”.

Alternative—mostly Marxian and post-Keynesian—explanations for the instabilities have been sought within the structure of the economic system itself. One such explanation is provided by heterodox economist Hyman Minsky. His argument is summarised in the following two-minutes excerpt from the documentary ‘Boom, Bust, Boom’.

Hyman Minsky suggested that stability leads to instability—a hypothesis that standard economics cannot effectively test. Economic models normally emphasise equilibrium between supply and demand. When there is a difference between the two, the market is assumed to balance this out. The transition from one equilibrium to another is assumed to be stable and any delay in the transition is perceived as irrelevant. However, real-world economies are hardly ever in equilibrium because of all sorts of delays in information or in getting goods on and off the market. As observed by Irving Fisher, one of Minsky’s inspirations:

“the exact equilibrium thus sought is seldom reached and never long maintained. New disturbances are, humanly speaking, sure to occur, so that, in actual fact, any variable is almost always above or below the ideal equilibrium” (Fisher 1933:339).

The idea of perpetual disequilibrium was picked up by Marxist economist Richard Goodwin. He proposed a model of a growing, yet always fluctuating, economy. In his model, high employment during phases of economic expansion pushes wages upward, which suppresses profits and leads to a reduction in investment. The contraction reduces employment and wages fall. This again increases profits and boosts investment (Goodwin, 1967). In short, downturns are caused by the increased bargaining power of workers—a result of high employment in upturn periods. A deceleration in the rate of growth brings about an acceleration, which brings about a deceleration again, etc. These fluctuations are driven by the internal clock of the economy, not by some external cause. In Marx’s own words:

“The mechanism of the capitalist production process removes the very obstacles that it temporarily creates” (Marx 1976:770).

Goodwin perceived a so-called predator–prey structure in the arguments put forward by Marx. As foxes eat chickens, chicken reproduction drops, which leaves fewer chickens for foxes to eat in the near future. Consequently, the fox population drops, which then allows the chicken population to rebuild. As its food source becomes available again, the fox population also rebuilds and the cycle starts again. In a predator–prey structure, the size of one population is continuously oscillating being constrained by the size of the other.Similarly, Goodwin’s model showed how economic cycles of expansion and contraction can be explained by “the inherent conflict and complementarity of workers and capitalists” (Goodwin 1967:8).

Goodwin’s model mimics perpetual cyclical behaviour. However, cycles sometimes amplify and become unstable. As explained in the earlier video fragment, the reason according to Hyman Minsky is an increase in private sector credit, or debt-fuelled growth. Economist Steve Keen recently incorporated Minsky’s hypothesis in Richard Goodwin’s model. Unlike standard economic models, Keen’s system dynamics model can generate instability as one of its outcomes. The model effectively mimics the behaviour of key indicators prior to, during and after the 2007/08 global financial crisis: dampening cycles in the short run and widening cycles in the long run—followed by collapse. The dynamic is visualised in the graph below.

To understand how the Keen’s model works, we must first ask: what is money? Nowadays, money is generally understood as a currency, i.e., a medium of exchange or a unit of account. However, money is also debt. This happens when credit is created by banks to be invested in the real economy, and to be paid back with interest. Credit money then appears in the economic system as a bank deposit (Daly & Farley 2012). This sort of debt reinforces itself: the more firms grow, the more confidence they enjoy, the more loans they get, the more they grow, and so on. It should be noted that it is in the interest of banks that the private sector gets and stays indebted to them. In the words of Willem Hoogendijk:

With an understanding of money as debt, let’s get back to Keen’s model. This is how it works. In the short run, the interest payments on rising debt reduce profits and investment. The next peak is lessened and the oscillations gradually dampen. In the long run, however, debt has continued to accumulate. Higher and growing interest payments reduce investment and employment, which leads to a more rapidly falling wage bill. This causes a surge in profits, loans and investment. This again boosts employment, raises the wage bill, and so on. Rather than dampened, however, the cycles now become more intense. Eventually, the peak is so extreme that the incurred debt brings profit down below zero and keeps it there. The system collapses (Keen, 1995).

(Keen’s model is much more detailed that what I have described here. As a start, you can find a description of a simpler version of his model in Rammelt (2019). You can also play around with the model itself here. For deeper insights into the topic, I suggest listening to Steve Keen’s lectures here.)

The ultimate question is: “Can ‘It’—a Great Depression—happen again?” Minsky famously asked.  Standard economics does not provide the right toolset to reflect on this questions. It is high time to look outside of conventional textbooks:

If crises in pure free-market capitalism are inevitable, as Minsky, Keen and others have concluded, it is then also high time to consider systemic alternatives.

One such alternative is degrowth. The movement asserts that economic expansion fails to achieve meaningful social and environmental goals, while slowdown destabilises the inner workings of the current economic system itself. Indeed, recessions, unemployment and foreclosures loom when the mechanisms of debt-fuelled growth slow down. The degrowth movement asks how we can escape this prison?

Degrowth is not a well-defined solution, but it does offer interesting glimpses of a different trajectory. It is associated with civil society efforts to relocalise and socialise economic life. Examples of practical initiatives include local currencies, non-profit cooperatives, worker-owned firms, transition towns, solidarity economies and so on. Their ambitions are more likely to be realised and expanded under the right conditions. The initiatives must therefore be fostered by the right policies, such as a universal social dividend, an income gap ceiling, negative interest rates or 100% reserve requirements. The initiatives and policies are not ends in themselves but could perhaps become part of an emancipatory transition that degrowth hopes to realise:

Ours is a liberation movement. A liberation from the prison which is the compulsion-to-grow economy” (Hogendijk 2015:21).

Fisher, I. (1933). The debt-deflation theory of great depressions. Econometrica: Journal of the Econometric Society, 337-357.

Hogendijk, W. (2015). Towards a flexible economy for a sustainable and fair world. Utrecht: Earth Foundation. 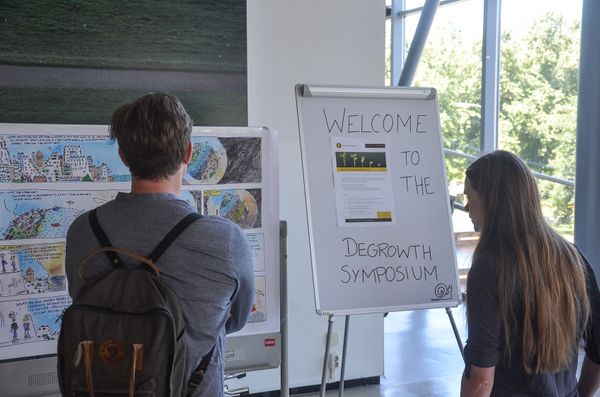 The concept of degrowth is now widely researched and practiced across Europe, but so far remained largely unexplored in the Netherlands. The first Utrecht Degrowth Symposium was organized to change this and to 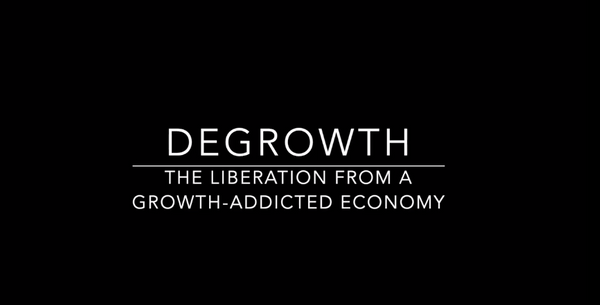 How is economic growth entwined with the social, environmental and financial turmoil of the past few decades? How can we have a stable and prosperous economy that does not grow—let alone one